As if cockroaches weren't gross enough, some of them can fly? The truth is that most species do have wings. Even though most of the species do not use their wings for flying at all, there are still many of them that can fly short distances. So, it is not impossible to have a roach fly some distance and land on you. Fortunately, the most common ones in the UK are not the best flyers but do have functioning wings. And flying or not flying, there are always professional exterminators who can get rid of them instantly.

What Kind of Cockroaches Fly?

There are thousands of species, most of which are considered pests. There are two well-known species of roaches that can fly - the smoky brown cockroaches and the male Pennsylvania cockroaches. But luckily, neither of them are common in the United Kingdom.

What About the Most Common Cockroach Species in the UK? 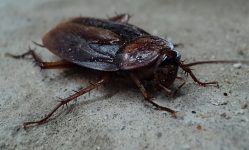 Can the German cockroaches fly? This is considered the most common species in the UK and Europe as well, they can grow up to 15mm in length and are paler brown than the American roaches. In their adult stage, they do have developed wings but neither the females nor the males prefer flying over walking.

Can the American cockroach fly? This is the largest kind in the UK and it reaches up to 30mm in length. Their colours vary between brown and mahogany. This species does have wings in its adult stage and is capable of flight at short distances. They can fly if they have to, otherwise, they would rather run very quickly.

Can the Brown-banded cockroach fly? They are called like this because of the light bands on their dark brown backs. They are also the carriers of many bacteria, parasites, and other diseases. However, only the males have fully developed wings in their adult stage, and would hardly ever fly. Whereas the female's wings are underdeveloped, thus they do not fly at all.

Can the Oriental cockroach fly? This species is also called black beetle because of their colour - either very dark brown or black. They, too, can grow up to 30mm and have wings. Neither the males nor the females can fly. Do not waste your time, call for a professional cockroach control at the first signs of this pest. Can baby cockroaches fly? No species' babies can fly. In the nymph stage, they are still growing and developing and do not yet possess wings. Get a Quote

Do cockroaches fly or jump?

The two actions are connected. As most of the species with wings do not fly like other winged insects, they can use their wings when jumping from heights, or to glide. Just be careful not to be in their path when they do so as they might end up falling on you.

How to Get Rid of Flying Cockroaches?

Stop believing the myths about cockroaches, there are ways to control them and exterminate them, so your home can be pest-free. Getting rid of cockroaches has never been nor will it ever be an easy task. Such is their nature that they are mostly found in damp and dark places - basements, sewers, other dirty places, and come into your home when they are looking for food. Even the types of roaches that live outdoors, when the weather is not preferable to them, they look for shelter inside. The best way to not have them inside of your home is prevention. Even though sometimes you can do everything right and they might still infest your home just because it is near a damp place. You may know that they are filthy, they carry diseases, but there are many facts about them that you don't know. You will hardly see them during the day but they are quite active during the night. Prevention is of major importance when it comes to cockroaches. Be sure to follow the above-mentioned precautions and your home will be less likely to be threatened by a roach infestation. If you have any issues or notice even one, be it flying or not, you should seek professional help. Get a Quote
This site uses cookies. See more about our internal rules and GDPR HERE. See general conditions HERE.
Accept Accept all cookies