Who is Justin O. Schmidt? 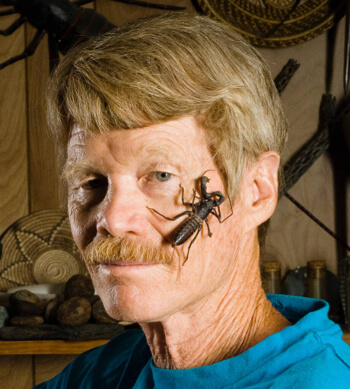 Justin Schmidt is an entomologist at the Carl Hayden Bee Research Center in Arizona. He is widely known for his research on how much pain can a Hymenopteran insect cause. His research is referred to as The Schmidt sting pain index scale. What it inscribes is the relative pain one can feel a sting by different insects, which are from the Hymenopteran order.

How was the sting pain scale created?

The Hymenopteran order includes more than 150,000 living species in it. For testing the pain from each insect Schmidt used himself. All for the sake of the research, he has been stung approximately 15,000 times by various stinging species. Schmidt’s sting pain index scale has studied 78 insects from all the Hymenopteran order of insects.

When he first began he needed to start with a stinger that is most familiar to people and widely spread. His base for the sting pain index was the stinger of a honey bee. Based on that he designed the scale to be initially from level 0 to level 4 where 4 is considered to be the most powerful sting. Whereas level 0 means that the insect’s stinger cannot break the human skin. Later on, it was adopted to measure the pain index from 1 to 4 since 0 was of no interest. The end game is to study these magnificent insects and develop ways to use their venom for medical purposes.

The sting of a single insect does not threaten our lives, but when it comes to a whole swarm of insects that is a different story. Insects are not hesitant to sting at the slightest appearance of a threat. A sting varies from one insect to another and is also entirely dependant on where you get stung. Even though all stings vary they could potentially fall in the same level of pain. 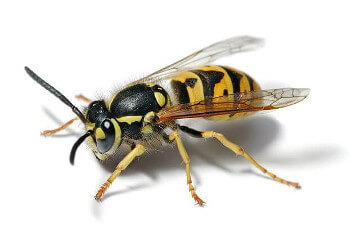 Yellowjacket or Yellow jacket is the common name in North America.
Source: Wikipedia

This insect easily gets mixed with a honey bee due to his similar appearance. In reality, the North American yellow jacket is the total opposite. He is a predatory wasp who often kills small honey bee colonies. He is aggressive and powerful, but not harmful to humans. His sting can be compared to having a cigar extinguished on your tongue. However, the pain can last for up to 10 minutes. When you encounter one you can identify it from its hairless body, compared to the bee. Don’t swat at them, because that will only agitate them even more.

Interesting fact: Yellow jackets build their colonies in spring. The air temperatures are quite crucial during nest building activity, which is begun by a single reproductive queen. 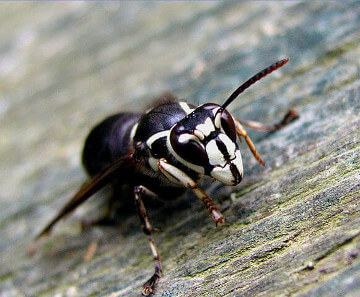 This hornet is a close relative of the yellow jacket and populates the Northern parts of America. It is one of the more social insects and prefers to have other bald-faced hornets, unlike the solitary yellow jackets prefer. They are very territorial of their nests and will attack when they sense danger nearby. However, they will not attack unless provoked when they are out searching for food. When you do get stung remember. The pain will only last 5 minutes top and it isn’t that much worse from the Yellow Jacket wasp sting. 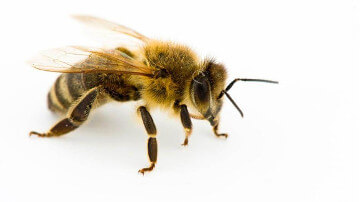 We all know about the honey bee. It’s the most widely spread species that can be found everywhere in the world except for Antarctica. As I mentioned before their sting is considered to be the foundation on which the pain scale relies, in terms of insect species. Their sting can be described as a flaming match that lands on your hand with a pain level of 2.

Honey bees are social insects, which easily interact with humans. When they feel threatened they attack in swarms and leave you in pain. Yellowjacket hornet can kill honey bees easily, one by one.

Not all honey bees are defenceless. The native Japanese bees are not quite as defenceless towards hornets. They have a secret weapon against the giant hornet.

Once the hornet is close enough as of one mind the bees will swarm in engulfing him. They won't sting him they will all start vibrating. It has been revealed that when they do so they can gradually raise their collective temperature to 117 C Fahrenheit. The Japanese honeybees can tolerate a temperature of 118 C whereas the yellow jacket hornet can withstand only 115 C. The hornet will slowly get roasted alive.

Prolific workers, strong in numbers trap-jaw ants run a ruthlessly efficient killing machine. Anything that passes their way gets chopped up and carried out to feed the colony hungry larvae. These trap jaws are proficient builders one minute, brutal butchers the next. Not only do they have a lighting quick jaws, but they have needle sharp stingers loaded with toxic venom that can bring down most competitors. 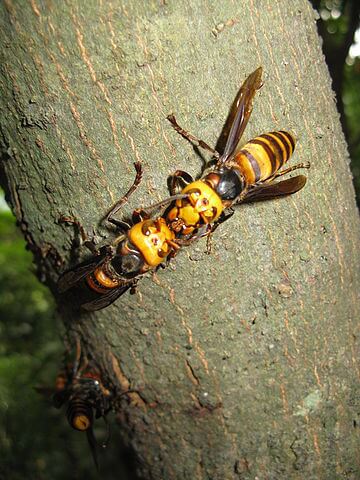 The Asian Giant Hornet is the biggest wasp on the planet. About as big as a matchbox and one of the most venomous insects in the world. This massive hornet can kill with its sting. A quarter inch long stinger injects a complex enzyme mixture that destroys tissue. That venom also knocks out red blood cells and can lead to kidney failure and death. A sting from them can last up to 10 minutes. They live throughout much of Asia, from India to Japan. 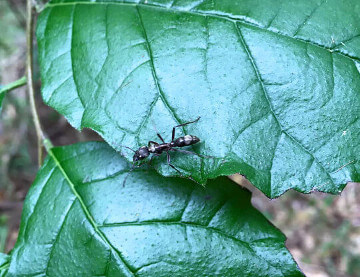 The hairy Panther Ant is the largest ant species in the world. They have a stinging power of 2 based on the Schmidt pain scale index. If you get stung you will experience a burning sensation, similar to having your skin on fire, which will last up to 10 minutes. The good news is that reports state they prefer to eat termites, which makes them the perfect natural pest control remedy. Be warned, if you disturb their ground-based nests. 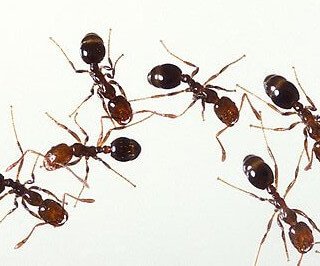 Red fire ants have gotten a bad reputation in our world. Most people know them as those pesky craters with a sting that burns like crazy. Nonetheless, fire ants embody some of our society most cherished ideals.

First of all, they are incredibly strong able to carry 10 time their body weight. Not only are they strong they have phenomenal teamwork enabling them to fight off predators. They are 2 from 4 on the Schmidt scale. Usually, you end up with a lot of them, which only intensifies the pain. 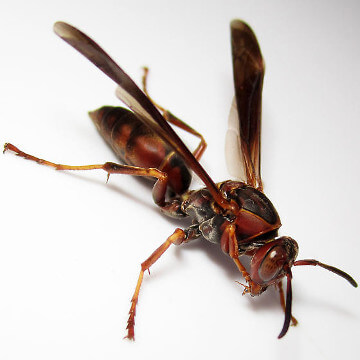 The Northern Paper Wasp is the last entry that falls under the level 2 pain index scale. They can sting multiple times. In doing so they leave a pheromone odour which signals the other wasps to attack and sting over and over. Their sting can cause an intense burning sensation that will last up to 5 minutes. 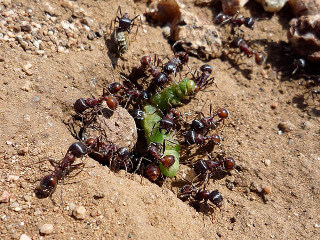 All ants have the ability to bite. What most people don’t realise is that many species, including the harvester ant, also have the ability to sting. A single sting is said to be almost 20 times potent as a honey bee. The effects of the venom from a single sting can last up to a week. That includes a searing pain the first couple of hours, followed by swelling, tenderness and periodic itching. This is defined as a solid level 3 pain index.

The velvet ant, which is actually a species of ground wasp and not ant at all claims a famous name as the cow killer. Ranked on the insect sting pain index as being fourth most painful sting in the insect kingdom. Rumour has it that the pain is so intense it can kill a cow. They say the sting of a velvet ant will last for 30 minutes.

One of the most impressive things about this insect is the size of his stinger. It’s about as long as the entire length of its abdomen. When you are out hiking and you accidentally step on one of them you won’t be able to crush them. The velvet ant has a very durable exoskeleton, one of the toughest exoskeletons in the insect kingdom. When your out and about in velvet territory make sure you wear your boots.

The tarantula hawk is the third most painful sting in the insect kingdom. It’s not a tarantula, it’s not a hawk, but like a hawk, it hunts for tarantulas. What the females will do fly around in the sky and they can actually sense chemicals in the air that will tell them where a tarantula burrow exist. They will land on the ground skitter across and go down the burrow. They will use their front legs to tempt the tarantula to come up his burrow.

The tarantula hawk is so agile that it can easily dodge the spider’s attacks. Baiting the spider to attack the wasp will spin its abdomen up underneath the belly of a tarantula. Insert a quarter inch stinger which will release a venom will instantly put that tarantula into a state of paralysis.

Known as one of the most aggressive paper wasp species in the world. These beautiful insects carry the warrior moniker from their commitment to attacking anything that disturbs their nest. However, very few people have ever been stung by one of these insects, because unlike normal paper wasp species they often build their massive nests high up in the trees in central and south American rain forest. A place where humans virtually never encounter them.

What’s interesting is this wasp looks like a warrior. When they are all together on the outside of the hive. What they will do to ward off anything that is thinking about getting into the hive, is they will beat their wings all in unison. That’s where they get the name warrior wasp. It sounds like warrior marching.

This wasp has the second most painful sting in the insect kingdom, right before the bullet ant. The sting is similar to that of the tarantula hawk. However, the pain from getting stung by a warrior wasp will only increase as time passes by and keep firing impulses.

This ant’s name is derived from its extremely potent sting. The bullet ants are incredibly common on the Caribbean side of Costa Rica. In terms of size, they are not bigger than a needle. The toxin that comes out of a sting of a bullet ant is an epithet toxin, which can cause you to hallucinate, cause muscle spasms and intense burning pain that can last for 24 hours.

The pain is associated with being shot with a bullet, as Schmidt describes it as "absolutely, excruciatingly, debilitating, incapacitating, to shut you down, sheer pain and there is nothing you can do about that". The bullet ant takes the number one place in the pain index scale as the most powerful insect pain sting on the planet.

Interesting fact about the bullet ant:

A tribe in Brazil uses the bullet ants as an initiation ritual to introduce young men into adulthood. They have to wear gloves filled with bullet ants. It is custom to wear them for as little as 10 minutes. During that time the bullet ants will repeatedly bite soaking the youngsters with poison.

Often this entire process will get repeated several times. Also, some older enthusiasts participate in the ritual. Many explorers and enthusiast have tried this ritual intentionally for the purpose of the adventure. What happens is they experience waves of pain that come, reside, come again, reside and so on.